For some firms, splitting office space and expenses is best practice

When J.T. and Ben Spandau were thinking about forming their own law firm, they heard plenty of voices telling them they were crazy. Naysayers warned they’d never make enough money to support themselves, and they wouldn’t have the procedural know-how to fully serve clients.

But the voices that resonated said otherwise, including those from the law firm they set up shop with just a block from the City-County Building in Indianapolis. & Spandau LLC opened its doors late last year in a space shared with Tate & Bowen LLP in the Inland Building on Market Street.

“We just kept hounding them and bugging them for advice and eventually they wore down and said, ‘Fine, share space with us,’” joked. He and Spandau had been working Tate and Bowen for insights about starting a practice, just as they had worked established lawyers in all levels of practice for advice on the practical aspects of hanging their own shingle.

“The arrangement’s working out great,” Kevin Bowen said. Pairing with & Spandau allowed both firms to negotiate a lease for a larger space yet keep operating costs low. 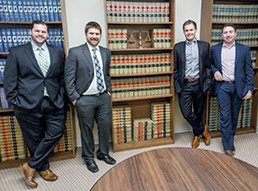 For many firms, splitting office space and sharing resources is a strategy that makes good business sense. But such arrangements aren’t without challenges. Lawyers said the Rules of Professional Conduct require strict separation of non-affiliated law firms, and it’s best if the firms’ practice areas don’t overlap. & Spandau aims to develop into a real estate boutique firm, while Tate & Bowen focuses on criminal defense, personal injury and business litigation.

Beau Badeaux of Badeaux Dean-Webster LLP said his firm was looking for a new office to lease when, by happenstance, a space-sharing opportunity arose.

Badeaux’s firm was looking at a space for lease in the Massala Building at Massachusetts Avenue and Alabama Street in Indianapolis when it learned Fleming Stage LLC in the same building had space available. The lawyers from both firms went to lunch, talked about their various practice areas, and Badeaux said things just clicked. “It felt serendipitous,” he said.

Aside from the professional and ethical concerns about firms sharing space, Badeaux said, group dynamics are crucial, even for lawyers who won’t be practicing together. “You see your office mates every day. … It probably wouldn’t have been something we would have done if we didn’t have a good vibe from the other attorneys.”

Badeaux’s firm moved from an office downtown on South Meridian Street, but he said the new space better fits its needs. The office is in a trendier part of town, closer to the City-County Building and is more accessible to parking.

“Finding a small, efficient place downtown … was really a struggle. I’m not sure (space-sharing) was even on our radar until we chanced into that space.”

For & Spandau, starting out in a sharing arrangement made economic sense. “We were balancing the idea of either being a mobile law firm or a brick-and-mortar law firm, and we thought it’d be best to be brick-and-mortar,” Spandau said.

They said Bowen and Tate shared details about what to expect, and splitting an office seem to work to everyone’s benefit. “Kevin and Brandon gave us the hard numbers that we actually needed,” said.

“They came to us because they had a business plan kind of structured, but they wanted to perfect it,” Bowen said, “and basically prepare to be successful.”

Spandau said he and saved their money around the figures Tate and Bowen furnished, and they economized. They scoured craigslist for office furniture and looked for deals at auctions and other places, even seeking out bargains on supplies and furnishings from firms that were merging or dissolving and lawyers who were retiring.

Spandau said the plan was for neither he nor to pay themselves for the first six months. “It really just starts to snowball and build upon itself,” Spandau said of the firm’s business. “We’re getting to the point where the snowball is really starting to accumulate.”

and Spandau said they’ve managed to keep the firm’s monthly bills in the range of about $1,500 to $1,700, most of which is their share of the office lease. “We’re working as paperless as we can, and the office-sharing agreement helps cut down our costs quite a bit because we’re able to share a copier, a printer, share internet services,” said. “Some of those things could be double if we didn’t share.”

There are no ethical problems for law firms that split up the monthly bills, but issues can and have arisen when firms fail to clearly indicate to clients they aren’t affiliated.

“We work hard to keep that separate, making sure people didn’t get the wrong impression — everyone’s not in the same law firm,” Badeaux said. Some attorneys in office-sharing agreements even post notices in the office about the distinct nature of their firms.

Tate said clients are clear about the distinction between his firm and & Spandau. “Our files are stored separately, computers are separate. Basically, everything is separate except for the actual space itself,” he said. noted that as an ethical matter, the firms won’t even accept documents from each other’s clients.

“We have a pretty good strike down the middle where we separate,” Spandau said. “We don’t split legal research costs, firm management costs, anything like that, so there’s a clear division. There’s also a clear division when someone comes in the door, we try to maintain, ‘This is our firm; this is the other firm that’s down the hall.’”

& Spandau and Tate & Bowen’s principals say they’ve benefitted from people who counseled them as they got their practices going, and they’re hoping to do the same for others.

“The Indianapolis legal community really came together and created a nice sort of safety net of mentors,” said, noting he and Spandau have cultivated plenty of people who are willing to take a call when they need a bit of advice.

With the assistance of LexisNexis legal technology executive Brian Beck, the two firms recently formed the Indiana Barrister Network. The business development network aims to provide a forum for sharing practical advice on how to start, run and manage a law firm. The network had its first social gathering this month and plans another in April. The group also maintains a website, www.indianabarristernetwork.com.

“We’re trying to build this awareness that this is something you can do and you can be profitable,” Spandau said. “You have to have the drive for it, but it’s not something that’s absolutely absurd and crazy. It’s manageable.”•

View that article on TheIndianaLawyer.com by clicking on the image below:

WE ARE READY TO ADVOCATE ON YOUR BEHALF

Tate & Bowen LLP represents individuals in all parts of Indiana. Through a team oriented approach, with a strong emphasis on communication with our clients, Tate & Bowen LLP works to provide passionate and effective legal representation with a competitive fee structure in a variety of fields.

Our office is located in downtown Indianapolis, close to the City-County Building. We have flexible options available to meet our clients at jail if you are incarcerated or at a convient location if you are located outside of central Indiana.